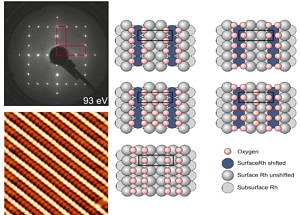 Structural analysis of the Rh(100)-3×1-2O oxygen induced reconstruction and superstructure.

The basis of almost all our projects is the precise characterisation of the atomic structure of the surfaces with which we work.The (non-exclusive) focus is on oxide surfaces, oxide films and nanostructures, as well as oxygen adsorbed on metal supports.
Our methodology uses LEED, or more precisely the analysis of LEED intensities and subsequent search for atomic structures for which the theoretically calculated intensity spectra matches the experimental ones best. This is exemplified in the picture above where an oxygen adsorbate structure on the Rh(100) surface is examined. The LEED pattern and the STM image reveal that oxygen induces a 3×1 superstructure. However, of the many possible atomic models consistent with the symmetry of the unit cell and the appearance in STM only the upper left one also reproduces the intensity of the LEED reflexes as function of electron energy.

Since the quality and success of this search process often depends on guessing the right “starting structure” we employ STM and DFT to provide additional information on the system at hand and rule out incompatible structures. DFT is used also to verify the determined structure independently.
In past projects we could resolve atomic positions to picometer level accuracy and validate that by DFT structure relaxations that agree at the same level of accuracy to the experimentally determined structures.